This article will help you understand the terminology and procedures required for successfully using available taxonomy keys. 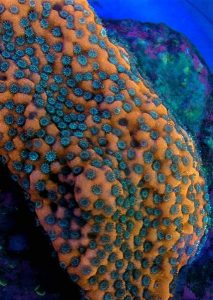 Figure 1. It is a pretty coral, but how do we identify it? Photo by Dana Riddle

If you do not know the names of things, the knowledge of them is lost too.

I recently needed to identify a particular coral to the species level. After consulting popular references, I was reminded of the broad range of terms used by various researchers. Some use botanical terms, others use common yet cryptic descriptions, while still others use a language germane to only coral specialists. Often, different terms shared a singular meaning, which can make for some frustration in a task already considered difficult.

If you’ve been in the reef keeping hobby for a while, you’ve probably outgrown the use of common coral names. Terms such as ‘mushroom’ coral ‘fuzzy green toadstool’ coral could be (and are) applied to vastly different taxa, creating confusion as to the actual identity and worse, improper husbandry procedures. Fortunately, many hobbyists and retailers have adopted use of correct ‘scientific’ nomenclature which applies universally accepted Latin names. Latin is the language of science, and the stony coral Pocillopora damicornis, for example, is the same animal in western Mexico as it is off the coast of eastern Africa. Advanced hobbyists can identify many stony coral species simply at a glance, while other corals’ true identity remains elusive even after considerable examination.

It is not the goal of these articles to make one a coral taxonomist or an expert in coral identification – there are a number of references (taxonomy keys) available that can do that job much better than I ever could (see the Product Review of Veron’s Coral ID CD in this issue). Instead, these articles will consolidate a number of terms within a glossary (at the close of this initial article) and act as a primer for the task ahead. Indeed, this knowledge is required in order to properly and fully use many of the popular ‘coffee table’ coral books, and without the understanding of the text, we merely stare at the pictures. And most books, even those written for the layman, offer so much more than pretty pictures!

These articles will present information required to properly identify many corals and what the obvious features tell us as reefkeepers. We will begin with very basic data and then will build upon this knowledge. As with any worthwhile endeavor, the learning curve can be steep at first. The science and nomenclature of coral taxonomy is not particularly easy to learn. But once the basics are in place and, with use of appropriate identification keys, you’ll recognize coral specimens to at least the genus level. You’ll confidently know your Astreopora from a Halometra. Those hobbyists willing to identify corals to the species level will likely be the most dedicated, but their path will be difficult (and, frankly, sometimes impossible).

I will use Veron’s Coral ID as the template for questions to be answered in case you’re using that key (and a checklist from Veron’s work is at the conclusion of this first installment).

The most important consideration, by far, is the desire to learn about coral morphology. Lack of expensive instruments will not stop a true student any more than a fully-stocked laboratory will motivate a disinterested person. Fortunately, coral identification will require only simple tools along with reference materials (often available on-line or at your local library). The following list is not meant to be all-inclusive, especially for later stages when we begin examine corallite structure. However it is a good start and one should acquire:

Question: Where did your coral come from? Unfortunately using an answer such as ‘From Joe’s tank, I guess.’ just won’t do! This is where using references such as Veron (1996), Veron (2000) or Woods (1983) is imperative! It is important not to guess – do your research. Fortunately, however, most aquarium corals are from the Indo-Pacific and especially from Indonesia, the Philippines or Fiji. Some of the high-end corals (with exotic sounding names as Superman, Sunset, etc.) often have a lineage that can be traced back to a particular shipment and location. If you’re using Veron’s Coral ID, answer question 1 (and 2, if known) on the Coral ID Checklist below.

Though it would seem intuitive to now turn our attention to corals’ obvious features, we will not. Instead we will examine those features that are not so obvious – the structural features of the coral skeleton (corallum) and polyp structure. The reasoning is simple – organization of the coral structure begins with tiny modules which are often iterated many times to form the shape we recognize as a ‘coral’. Identification from observations based on an overall architectural level (i.e., grown colony) often is not possible when all we possess is a small piece or fragment from an adult colony. So, in order to get the ‘big picture’, we must begin with a small one.

Rosen (1986) described a concept of coral growth as one where compact individual units (modules) are repeated until an animal readily recognizable as a coral species becomes evident. This researcher describes the coral polyp (see Figure 3) and its calcium ‘cup’ (properly called the corallite – see Figure 6) as the basic modular unit called a ‘zooid’. It is natural that we begin with a coral’s basic structure, and build a coral from a basic unit. Once we’ve ‘built’ a coral from its basic genotypic components, we’ll examine within this series how the forces of nature interact with the coral animal and its shape (the genotypic shape becomes phenotypic). 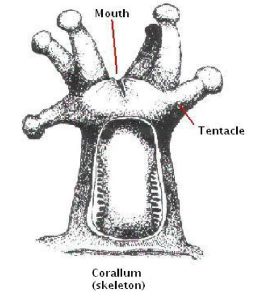 Figure 3. The fleshy portion of a stony coral polyp, attached to the corallum. Drawing by Dana Riddle.

Question: Is the coral a module or modular? How Many Mouths? Solitary corals consist of a single polyp and one, two or multiple mouths (such as Catalaphyllia, Fungia, Herpolitha, etc.) and are a single zooid – a module. Fortunately, the number of solitary corals is relatively few and a student will do well to learn them.

Determination of the number of mouths is sometimes not easily done – mouths can be tiny (such as those seen in Pavona corals) and a good magnifying glass or microscope may be necessary. I won’t labor on this further; the comment below should clarify things. 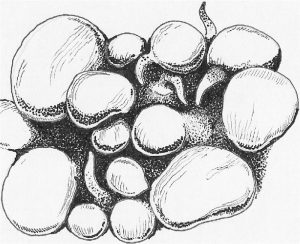 Figure 4. Vesicles, or modified tentacle structures as seen from the ‘Bubble’ coral (Plerogyra, Physogyra). These vesicles may become tentacle-like during the night. Drawing by Dana Riddle.

Is the Coral Attached or Free-living? This is more of a question for observations made in the wild than an aquarium. A novice could easily mistake any fragment or cutting from an adult colony as ‘free-living’. Generally, free-living corals consist of a single polyp as we discussed above. Answer Question #4 on the checklist.

What is the Tentacle Length? We will need to estimate tentacle length (fortunately, Veron’s ID uses increments of about 10mm). The clear plastic ruler marked in millimeter increments is most handy here. See comments about water motion and tentacle expansion below. Answer Question #19.

Are Tentacles Most Expanded During the Day, or Night? Tentacles may exhibit diurnal morphologies (such as the Bubble corals (Plerogyra), where the tentacles inflate during the day and become ‘vesicles’ – see Figure 4) – do the tentacles expand during the day, or are there vesicles, a mantle (a fleshy projection) or simply no expansion during the day? Note to Hobbyists: It is recommended that hobbyists compare tentacular expansion just as the aquarium’s lights turn on and then again after a few hours of light. Corals may have some tentacle expansion during the day but much more during the night (or vice versa). There are special circumstances facing aquarists – what if the polyps/tentacles are not expanded day or night? There are, of course, multiple reasons for this; however, poor or insufficient water motion is often the reason.

Does the fleshy portion of the coral mask the Skeleton (Corallum)? Does the coenosarc (the fleshy connective tissue between polyps) mask the corallum fully (for example, as an expanded Goniopora does) or partially, or is the shape of the skeleton readily apparent (as with Acropora specimens)? Answer Question #20.

We now answered 7 questions on the checklist, and this ends our observations of the polyp and fleshy portions of the zooid. With luck, these questions have identified the coral to your satisfaction. If not, the task becomes more involved. Our attention will now turn to the corallum – the stony skeleton.

Figure 5. Skeletal Components. These, combined with the soft tissue elements seen in Figure 3 form the ‘zooid’. For clarity, four septa (of a group of 6 or more) have been omitted in this diagram. Drawing by Dana Riddle.

The coral skeleton, properly called the corallum, plays a very important part in coral identification. There are a few terms we should know. If you’re using Veron’s ID Key, the basic terms include calice, coenosteum, columella, corallite, costae, paliform lobes, septae, septo-costae and theca (See Figure 5, and the glossary).

It is also important to be able to count septa and identify their orders or cycles. The basic corallite structures are shown in Figure 6.

Not all corallites will follow the rule of structure shown in Figure 6. In particular, some corals’ septa are arranged in a pattern where septa of the fourth cycle can enclose those of the third. See Figure 7.

Removing Coral Tissue from the Corallum

After we’ve taken the time and expense to maintain corals in captivity, it is almost heresy to discuss sacrificing a small portion of the colony in order to identify it. Fortunately, it doesn’t take a large portion, but the tissue will have to be removed. 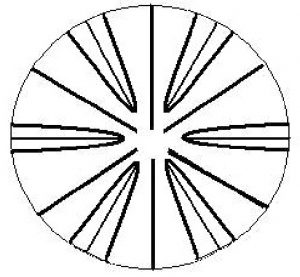 Figure 7. Pourtalés Plan. This septa arrangement differs in that the 4th cycle septa are longer and might fuse around the 3rd cycle septa. Drawing by Dana Riddle.

The generally accepted method is to use a high-pressure water stream (such as the Water-Pik method recommended by Johannes, 1970). This method is especially useful when recovery of the tissue and/or zooxanthellae is needed. It’s fairly inexpensive as well (I got my Water-Pik about 10 years ago at Wal-Mart for $30). However, it is a messy proposition – Skip using the Water Pik method if the thought of coral mucus/tissue in your face or hair bothers you.

A viable and less distressful alternative (at least for the hobbyist) for removing tissue is available – and the average reef hobbyist probably has the chemical needed to do it – Use calcium hydroxide (kalkwasser) to dissolve the tissue. Soak the coral fragment in a saturated solution overnight and the tissue (usually) rinses right off and leaves the corallum intact.

Next time, we’ll examine some of the finer details of coral skeletons, and will use our building blocks to assembly a coral colony.

If you think you’ll never actually use at least some of these glossary terms in coral identification, think again. The worksheet below, compiled from Veron’s Coral ID: An Electronic Key to the Zooxanthellate Scleractinian Corals of the World, lists the questions asked in order to identify a coral to the species level. Some IDs are easy, and involve only a few steps, while others could conceivably involve answering every question. Questions 1 through 21 are basic questions. Questions 22 through 44 are more advanced, and could require microscopic examination of the skeletal structure (which likely involves sacrificing a small portion of the colony).