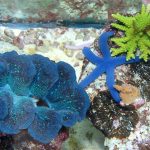 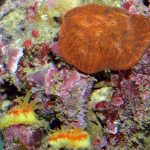 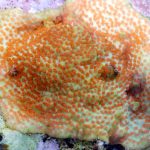 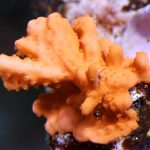 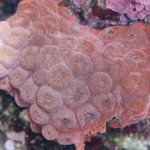 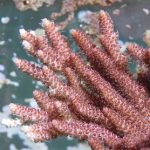 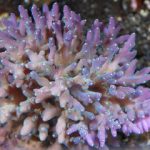 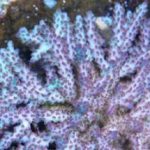 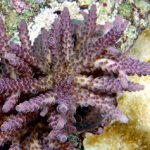 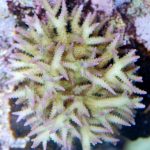 Figure 8. Invertebrate population in the author’s tank during the “week in the life” study.

Water samples from 6 different marine aquaria spanning a range of husbandry conditions were examined for TOC levels. For standardization of the experimental protocol, samples were taken at approximately (a) 0.5 – 2 hours after feeding, (b) 10-12 hours after feeding, and (c) 20-24 hours after feeding. Key tank parameters, aquarium characteristics and husbandry techniques are detailed along with the measured TOC values. All tanks appeared in general to be healthy with thriving livestock and stable conditions.

Four of the seven aquaria examined in this study (the author’s tank and tanks # 1, 5, and 6) are reef tanks that fit the standard Berlin model: sand, rocks, a protein skimmer, and GAC (Granular Activated Carbon). All of these tanks have diverse livestock including fish, corals, snails, and assorted other invertebrates. Interestingly, all of the “standard model” tanks exhibited TOC values that mapped closely onto the range observed for healthy, thriving natural reefs; 0.7 – 1.4 ppm. The three remaining successful aquaria do not contain one or more of the “standard model” components, and the TOC values of these atypical tanks are on the outside edges, or deviate entirely, from natural reef values. For example, tank #4 lacks sand and rock, but does have a skimmer and uses GAC. No fish are in residence, as the livestock consists of only hard coral frags and a few snails and shrimp. Thus, the presumed major repositories of bacteria (sand and rocks) are missing, and there is only minimal coral volume to house bacteria. For this tank, the TOC values (~ 1.2 – 1.6 ppm) are at the upper edge or exceed those found on natural reefs. Nevertheless, the coral frags apparently have adapted and are thriving. Tank #2 lacks sand and a skimmer, but it does contain generous amounts of live rock, a few fish, and several large, mature colonies of soft corals; significantly, GAC is used continuously. The TOC values found in this tank (~ 0.7 ppm) are at the lower edge of the range found on natural reefs. Finally, tank 3 is the most primitive of all; no water purification equipment (skimmer or GAC) is employed, some live rock is incorporated, and no sandbed is present. Nevertheless, the fish and soft corals are thriving. The TOC levels in this aquarium are exceptionally high (> 5 ppm), as are the nitrate and phosphate concentrations. Presumably, the absence of purification equipment is reflected in the high TOC and nitrate/phosphate levels; all the same, the livestock seems to have adapted. The somewhat subversive thesis that perhaps skimmers do not contribute much to TOC removal/water purification was raised in the discussion of Figs. 5 and 6; the exceedingly low TOC values in the skimmerless tank #2 provide further support for this notion. What then, distinguishes this tank from the other skimmerless tank, #3, which has exceedingly high TOC levels? Both tanks lack sandbeds and have similar fish loads and soft coral/invertebrate populations. The one identifiable difference in husbandry between them involves GAC; the low TOC tank (#2) uses GAC-based water filtration, whereas the high-TOC tank (#3) does not. Does GAC really make such a spectacular difference in TOC loads while at the same time protein skimmers scarcely have any effect at all? This question and related topics are currently under study, and results will be reported in the near future.

Coral reefs have been characterized as oases of biological productivity in a marine desert (Capone, 1992). The surrounding oligotrophic (= nutrient depleted) waters provide little sustenance to the reef biota. As a consequence, complex nutrient recycling webs have evolved on reefs to retain and reutilize essential elements like nitrogen and carbon. The carbon cycle on reefs is multifaceted and is beginning to be unraveled. Reliable measurements of dissolved organic carbon (DOC) levels are critical for this goal, and the introduction of the Shimadzu TOC Analyzer represents an unequivocal leap forward in research capability. On thriving reefs, most carbon input originates with atmospheric CO2, which is “fixed” via photosynthesis first into carbohydrates, and then into a multitude of other organic molecules. Much of this carbon, which is generated by the zooxanthellae in corals, is reemitted as coral mucus. This coral contribution significantly enriches the pool of DOC.
This DOC is prime food for a large variety of reef microbiota, including bacteria, both in the water column and in the corals themselves, and microplankton, etc. Finally, these microflora and microfauna serve as food for a variety of filter feeders, including, again, the corals. Thus, the interdependency of reef organisms, both large and small, is revealed as the carbon-based nutrients are recycled. The surrounding oligotrophic ocean serves as a buffer which can absorb excess nutrients that might otherwise prove harmful to reef inhabitants and modulate the levels of dissolved species by import and export, depending on relative (reef vs. open ocean) concentrations. Our captive reefs fall far short of this nutrient commerce model; we have, of course, no open ocean buffer to dilute away waste and so we rely on water changes to perform this vital function, and it remains unclear whether our aquaria contain all of the components, in appropriate proportions, of authentic reefs necessary to promote efficient nutrient recycling. Nevertheless, what we do seems to work, at least most of the time. But, what happens when things go wrong? Circumstantial evidence from Rohwer’s studies implicates DOC imbalances in coral mortality, with runaway bacterial growth as a likely mediating culprit. Can these observations inform aquarists, and is there a response that might ameliorate the problem? Certainly the first step is to establish a baseline of TOC ( DOC) levels in healthy reef aquaria under different husbandry protocols. In this article, data has been presented that accomplishes this goal, and further, validates these TOC numbers by comparison to TOC/DOC levels on healthy reefs around the world. In addition, the surprisingly minimal impact of protein skimming on TOC levels was revealed. On this point, it is apparent that if TOC levels can be monitored to assay the effects of one skimmer (the H&S A200 in this case), then they can be monitored to measure the impact of different types of skimmers operating on an experimental tank. In addition, these types of experiments also can be used to probe more directly and quantitatively the TOC removal capabilities of Granular Activated Carbon (GAC) that was hinted at in the tank #2 vs. tank #3 comparison. These types of experiments might allow, for the first time, a quantitative evaluation of skimmer and, independently, GAC performance which is divorced from the hype and misinformation that seems to surround these areas of marine aquarium maintenance/equipment. These experiments are ongoing and results will be reported in due course.

Finally, the goal of identifying approaches to halt incidents of coral mortality in reef tanks may benefit from data collection from “sick” tanks rather than the healthy aquaria examined in this study. If tanks undergoing coral crashes have an unusually high (or low) amount of TOC in the water but otherwise have acceptable water parameters, then a new and otherwise unappreciated villain will be in hand. Under these circumstances, what can the aquarist do? One experiment described by Ferrier-Pagès on Galaxea provides food for thought. Specimens of this coral were treated with the combined antibiotics penicillin, streptomycin, and amphotericin; subsequent bacterial uptake of DOC, which Rohwer identified as a mechanism for coral mortality when occurring in excess, ceased.

We thank the Eberly College of Science at the Pennsylvania State University for financial support, Dr. Bruce Logan and Mr. David Jones of the Pennsylvania State University Department of Civil and Environmental Engineering for use of the Shimadzu 5000 TOC Analyzer, and members of SCARS (State College Aquarium and Reef Society) for donating water samples.