With worldwide environmental issues very much at the forefront of our lives today, the aquarium hobby (with its often consumptive use aspects) and true aquatic conservation are often at odds with one another. Most ardent conservationists cannot or will not reconcile the juxtaposition of these two issues, and generally side with pure conservation in which there is the belief that no “take” (consumptive use) of certain wild marine organisms should be allowed. Aquarium hobbyists on the other hand tend to justify their use of aquatic animals by way of the education and entertainment these creatures provide them and their families. Public aquarists validate the existence of their own exhibits in much the same way. The desire to match real world conservation with their personal hobby sometimes leaves home aquarists vulnerable to misdirection in regards to the various conservation initiatives available for them to participate in. For example, aquarists may help to justify their “take” of aquatic organisms by showcasing their efforts to support some particular conservation program. Problems arise if the conservation program is flawed in some fashion, or if the result of the program does not offset the effect that the “take” has on the environment. Generally, information regarding various conservation efforts is promoted by the people who are involved with those programs. It is not considered “politically correct” in many quarters, to criticize these efforts. The result is often a one-sided view of their overall effectiveness. This article attempts to balance that problem by exploring issues that may show these conservation efforts in a different light.

Much of the following material is my personal opinion. This does not mean that it can simply be discounted as, “Oh, that’s just his personal opinion”. Remember that much of the positive evaluations given by the promoters of these same conservation efforts are just their opinions as well. Relying on an opinion, based on extensive experience, while not as defensible as the proof of a scientific hypothesis, is still better than relying on “feelings” or conclusions drawn from a more limited experience base. This material is meant to allow the reader to see that there is often more than one side to evaluating a conservation program, and very often issues are painted in various shades of gray. I support many of these initiatives myself, and for over fifteen years, have helped manage one (the Lake Victorian Cichlid captive breeding program). I know it is not a perfect program, and I outline those deficiencies just as I have with the others here. I have spent almost 25 years working for public aquariums – with more than half my life devoted to aquatic conservation, I want to help others find ways they can support aquatic conservation as well.

People who acquire wild-caught animals for aquariums (both home and public) have a substantial negative perception to overcome. Some of these criticisms are deserved, but not all. A few years ago, I found this highly damning quote on the Internet:

“One of the biggest problems with the coral reefs around the world is there’s a huge demand for tropical fish for aquarium hobbyists – in the United States, mostly. They catch these fish often with cyanide or dynamite, or bleach they squirt on the reef to get the fish to come up. Then they net them, put them in boxes and [ship] them. [Most] die in transit, and meanwhile, the coral reefs have been destroyed. We’ve lost 40% of the reef in Florida, almost 30% [globally].”

This quote was found on the web page of a marine conservation organization, and was attributed to a relative of a famous marine biologist. It has since been removed from the site, so I’m including it here just as an anonymous example of how some environmentalists perceive the aquarium industry. Certainly this quote is highly inaccurate and misleading (especially the last two sentences) but “perception is reality” for many people – so it is important for aquarists to be aware of this.

For many people, true conservation needs to begin in the field, where the problems are actually occurring. There are some aquarium conservation initiatives that focus on this “in country” work. Most in-situ conservation efforts revolve around the creation of wildlife reserves or other management techniques designed to limit human impact on wild populations.

Already in force in Florida and Hawaii, local governments could impose limits on the number or size of aquarium fish that could be collected. If a certain species was being overexploited, its capture could be limited by law. Likewise, if too many small fish of a given species are being collected, minimum size limits could be enacted. The primary drawback to this method is the often lack of proper scientific analysis of the fish populations prior to the development of the law(s).

Some efforts focus on educating the collectors and primary consolidators towards better collection methods and improved holding and shipping techniques. These grass roots initiatives often face the problem that in “doing things correctly” the cost rises for the collectors. The problem is that their animals are not easily differentiated from the poorly handled animals, so they are unable to charge a premium for their product that would in turn help offset the additional costs. Backsliding is common due to the necessity of keeping costs down.

This conservation method attempts to reduce the problems faced in the previous example by identifying for the customer, which animals have been collected and handled in an appropriate manner. Since the organisms are positively identified, they can be priced accordingly, and not have to compete directly with the less expensive, poorly handled fish. In reality, since the fish cannot be tagged, they must be followed through the very convoluted supply chain creating a ponderous bureaucracy that can easily become unworkable. Even when handled properly, marine fish are a perishable commodity and if this process slows down the movement of the animals from ocean to aquarium, even the best handling techniques may not keep the fish in adequate condition.

In some cases, the problems associated with collecting aquarium fishes can be mitigated through ex-situ methods (outside the areas where the fish are collected). Obviously, these efforts must have a direct feedback to the country of origin; else the fish will continued to be harvested in an unsustainable fashion. There are two basic forms of this type of conservation, voluntary (educated consumers) and involuntary (trade restrictions). If aquarists are informed that certain species are being over harvested, they can make the decision not to purchase them (as in the Bangaii cardinalfish). Alternatively, governments can step in and set trade restrictions or limits (such as with stony corals covered under CITES).

This acronym stands for the “Convention on International Trade in Endangered Species of Wild Fauna and Flora”.  The 160+ member countries use these conventions to monitor and restrict trade in critical species, by listing endangered or threatened species into one of three appendices.  Appendix I includes those species most endangered in the wild; Gorilla, giant panda and Asian arowana for example.  Trade in these species is allowed only under exceptional circumstances.  All stony corals, Tridacna clams and seahorses are listed in appendix II.  This means that they cannot be imported into the United States without proper permits from the exporting country.  Appendix III includes species that a single member country wishes to monitor more closely, especially in light of that species possibly needing to be listed in appendix II in the future.  Proposals to list, uplist or downlist  a species (or population of a species) are made based
on new population data and must be approved  by a two thirds majority vote of the member countries.

For many years, attempts have been made to educate the consumers (home aquarists in this case) regarding the potential for ecological harm that their hobby can cause. Even general materials such as this article can serve to help educate the consumer. Two problems face this method; first, the consumers must first want to be educated and secondly, the message must be effectively delivered to them. Education with no subsequent change in behavior is simply wasted effort.

Undeniably an unpopular conservation technique (with aquarists) would be the limiting of trade at the “demand side” of the equation. Laws could be passed limiting the ability of aquarists to purchase certain animals at risk in the wild – even if the country where the animal lives does not protect them, if the market is limited through ex-situ laws, the animals could still be protected. 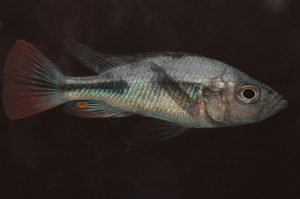 This Haplochromis piceatus is extinct in the wild and all of the remaining population of this fish (less than 1000 animals) is being held at three public aquariums in the United States.

While many freshwater fishes and aquatic plants have been grown for the aquarium industry for many years, captive propagation of most marine aquarium specimens is much more difficult. Great strides are being made in this facet of aquarium husbandry and each year, more captive raised marine specimens are available in the pet trade. It is generally assumed that since these captive raised animals did not originate in the wild, that they have minimal impact on natural systems.

Captive breeding can serve to reduce the “wild take” of a species. A case in point might be the Mexican blind cave tetra. Rare in the wild, and found only in localized habitats, this fish is commonly sold in most pet stores for a few dollars because they are produced by the thousands in Florida fish farms. In order for this method to work, the cost of the wild counterpart to a species must be higher than the cost of the captive raised animal, and the quality of the latter must be higher. 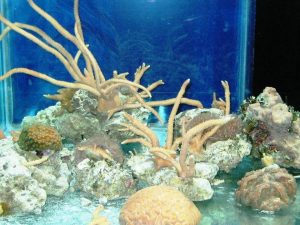 One special concern is seen with public aquariums propagating endangered Atlantic Acropora coral. They must take care to house these corals in systems that are isolated from Pacific corals in order to reduce the risk of transplanting some exotic disease along with the corals.

Some captive breeding programs are designed with the goal of reintroduction of the animals to their native habitat. This is only a viable conservation method if the habitat can be repaired to the point that whatever deficiency that caused the species’ demise in the first place has been corrected. For example, some species of Haplochromine cichlids have become extinct in Lake Victoria due to the introduction of the predatory Nile perch. Some of these species are being maintained in captivity, but they cannot yet be returned to their natural habitat because the perch population is still too high in the lake. Another concern with population reintroductions is the possibility of non-native pathogens being returned to the wild along with the cultured species.

Of course, the collecting of individual aquatic animals is not the root cause of many of the issues facing marine ecosystems. This article discusses conservation methods designed to protect species, not necessarily ecosystems. Indirect conservation initiatives must also be evaluated, such as reducing plastic waste in the oceans, limiting the carbon dioxide output of human activity, reducing fish harvested for human food to sustainable levels, and so forth.

Jay Hemdal has kept aquarium fish since he was four. He set up his first marine aquarium in 1968 when he was nine years old. He later worked part time for many years at various local retail pet stores and fish wholesale companies while he was living at home and then during college. After graduating from college with a degree in aquatic biology, he managed the aquarium department of a large retail pet store for five years until 1985, when he was hired as an aquarist/diver (and later department manager) for a large public aquarium. In 1989, he accepted the position of curator of fishes and invertebrates for another public aquarium, where he remains today. Jay has written over 200 articles and papers as well as seven books since 1981.

Do It Yourself: A Guide to Making Gadgets for Your Aquarium, Part One