Our quest for understanding of coral coloration, as this series has shown, is perhaps not as simple and straightforward as it may have originally seemed. The various pigments (let alone combinations) of chromoproteins and fluorescentproteins can produce a staggering array of apparent colors. Though this series is now over 160 pages in length, it is essential that we identify, and havea listing of, those pigments known responsible for anthozoan coloration. These pigments are then categorized. Once this exercise is completed, we can we begin to understand which environmental ‘triggers’ are necessary to induce them. 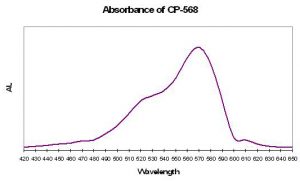 It is becoming obvious that there are hundreds, if not thousands, of fluorescent and non-fluorescent proteins within cnidarian tissues. In fact, patent claims of Matz et al. (2005) identify almost 100 different pigments based on their molecular structures. Many of these have virtually the same absorption or fluorescent peaks, yet are distinctly different pigments. However, these researchers believe that the non-fluorescent chromoproteins are of singular lineage, and likely evolved in the same manner (See Part One of this series for the ‘evolutionary tree’ of coral pigments).

We’ll begin this month with a pigment that absorbs yellow-green light and visually appears violet in color. 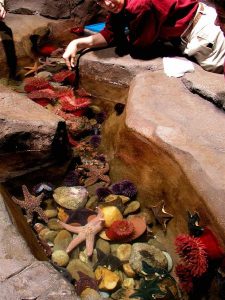 This pigment is also called asulCP or asCP, and is from the anemone Anemonia sculata (Labas et al., 2002). See Figure 10 for the absorption spectrum.

CP-571 is has been isolated from tissues of the ‘giant anemones’ Condylactis gigantea and Condylactis passiflora (variously called ‘cgigCP’or ‘cgCP’, and ‘cpasCP’ or ‘cpCP’, respectively, Labas et al., 2002). See Figure 12.

Found in the anemone Anemonia sculata. This chromoprotein is not similarto DsRed-type chromophore. This pigment is one that is not normally fluorescent but can become so (it ‘kindles’ in response to strong green light. Once kindled,excitation maximum is 575nm and emission maximum is at 595nm. In other words, it absorbs yellow light and fluoresces it as orange-red – Verkhusha and Lukyanov, 2004).

Interestingly, traces of red fluorescence are seen in the chromoprotein state (which appears purple); red fluorescence increases in the presence of greenlight, but is inhibited by blue light (Lukyanov et al, 2000).

Isolated from tissues of the anemone Heteractis crisperi. This pigmentis also called ‘hcriCP’ or ‘hcCP’ (Labas et al., 2002). Maximum absorbanceis at 578 nm (see Figure 13). Site-directed and random mutagenesis has created a fluorescent form of this chromoprotein, with an excitation of 588nm and maximum emissions (depending upon mutant) of 618nm or so. 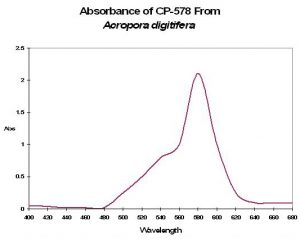 A pigment similar to that in Heteractis crisperi (above) has alsobeen found in Acropora digitifera (Dove et al., 1995; See Figure 14). 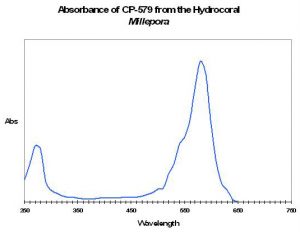 Figure 15. A chromoprotein with an absorbance spectrum typical of many. After Karan et al., 2006.

Karan et al. (2006) found chromoprotein with maximum absorption of 579nm (virtually identical absorbance to that in Millepora, above) in the stony coral Acropora nobilis (see Figure 16).

This chromoprotein has been isolated from several coral genera; including Acanthastrea sp.(see Figure 17), Montipora sp. (see Figure 18) and Porites murrayensis (see Figure 19, all after Karan et al., 2006). One may wonder why these researchers are ‘splitting hairs’ and defining the maximum absorbance at a fraction of a wavelength. I can only speculate, but tend to think that the discoverer was very exact when describing this pigment’s properties in their patent application. 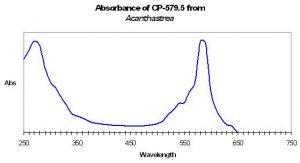 Figure 17. A chromoprotein from the stony coral Acanthastrea. After Karan et al., 2006.

CP-580 is found in several stony corals, including Goniopora tenuidens (Labaset al., 2002) and other Goniopora species, including G. lobata, G. djiboutiensis and more (Veron, 1986). See Figure 20 for a photo of a colorful Goniopora specimen, and Figure 21 for the absorption spectrum. As with CP-562, this pigment changes from a non-fluorescent state to that of fluorescence through chemical oxidation (and not exposure to light as the shift can occur in darkness).

Dove et al., (1995) states this pigment (or a similar pigment with a maximumabsorption at 580nm) is found in purple Acropora digitifera specimens.

This pigment’s absorption maximum (as those found in Goniopora tenuidens -also called gtenCP), is pH-dependent. For instance, maximum absorption is 384nm at pH of 3.0; upon further acidification (to 1.8) the red chromophore shifts its maximum absorption to 436nm. The maximum shifts to 450nm at pH 14.0 (Martynovet al., 2003; See Figure 22).

Salih et al. 2002 show a photograph of fluorescent granules in a polyp tentacle of Goniopora tenuidens. The granules – called chromatophores – are situated above the layer of symbiotic zooxanthellae. Interestingly, the pigment seems to be in transition from red-to-green. This transformation seems to be a one-step conversion, with a combination of green and red pigments appearing to the eye as yellow. Whatever the case, the photo is particularly interesting in that it depicts a color shift in progress. 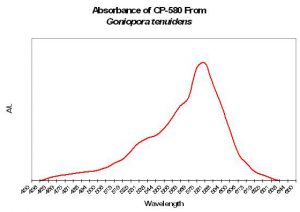 Figure 21. Absorbance spectrum of a non-fluorescent pigment from Goniopora. 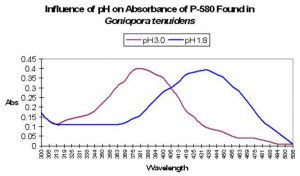 Figure 22. Influence of pH on absorbance of CP-580 from Goniopora tenuidens. After Martynov et al., 2003.

There are at least 3 chromoproteins with a maximum absorption at 580nm, and all (to my knowledge) have been found in the tissues of Acropora specimens. 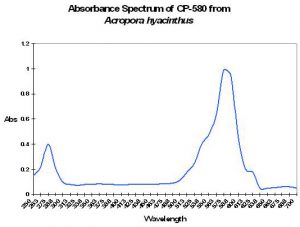 Another chromoprotein with maximum absorption at 580nm, also from Acropora aculeus. This protein is slightly different in structure from the chromoprotein described above. See Figure 25. 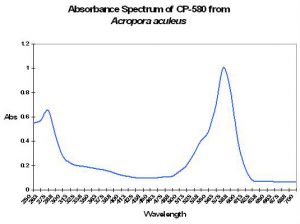 Figure 25. This CP-580 is structurally different than other pigments with a maximum absorption at 580nm. After Matz et al., 2006.

This chromoprotein was found in an Acropora nobilis (Karan et al.,2006). Again, the fractional description is possibly due to the requirements of the patent process.

One of several chromoproteins found within the tissues of a Montipora sp.(efflorescens?) by Karan et al., 2006.

Shibata (1969) reported the maximum absorption at 586nm (although he seems to have rounded off to 590nm). He isolated this pigment from red, pink, mauve and violet Acropora specimens, in combination with CP-560. See Figure 28.

This chromoprotein, or variants with a maximum absorption at 588nm, has been isolated from a number of stony corals. 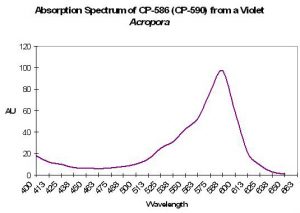 It is little wonder that Acropora specimens are so popular in reef aquaria – CP-588 (from Acropora formosa) is yet another example of a stony coral pigment (Dove et al., 1995 – See Figure 30). After Dove et al., 1995. 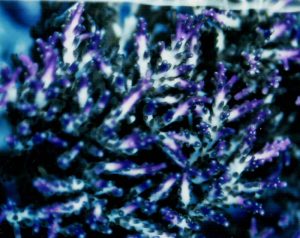 Figure 29. A violet/purple Acropora specimen, probably much like that Shibata observed. From the aquarium of Chicago hobbyist John Cummins. 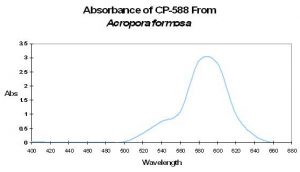 Figure 30. Acropora formosa (muricata) specimens are not only relatively easy to maintain in captivity, but are visually appealing when they contain chromoprotein 588.

This blue chromoprotein is found in the scyphoid (‘cup-like’) jellyfish Rhizostoma pulmo (Bulina et al., 2004). This 30-KDa chromoprotein has a absorption peak at 588nm (orange) and absorption ‘shoulders’ with peaks at 624nm (red) and 420nm (blue).

Technically, the protein is fluorescent, but of very low quantum yield. This pigment is closely related to a blue pigment called ‘Cassio Blue’ from the jellyfish Cassiopeia xamachana. 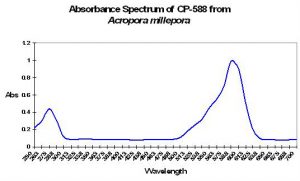 Found in Acropora millepora (by Matz et al., 2005), the absorption spectrum suggest this pigment is found in the blue variant of this species. However, it could also be a minor pigment and one that does not significantly contribute to apparent color. See Figure 31. 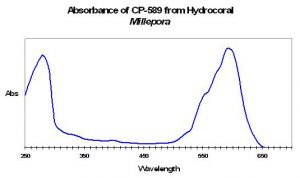 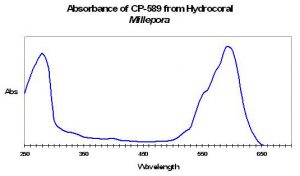 See Figure 33 for details of this pigment’s spectral characteristics.

It (CP-590) is also found in combination with CP-560 in a pink Acropora (Shibata,1969 – note Shibata’s CP-590 is actually CP-586. He rounded his number upwards) and probably Acropora formosa (Dove et al., 1995). Absorption maximum of the pigment from these corals is 590nm. However, the absorption maximum is pH-dependent, and is capable of appearing blue, red, yellow or colorless as pH drops (Wilmann et al., 2005). Drastic color shifts occur at pH values unlikely to be seen in aquaria (that is, <5 or so). The chromophore (the pigment’s ‘package’) is relatively insensitive to high concentrations of iodide (Wachter and Remington, 1999).

Will the real Rtms5 please stand up? CP-592 seems to be the pigment identified as Rtms5 by several researchers, although it is referred to as CP-590 by some. See Figure 37.

This blue pigment was isolated from the anemone Anemonia sculata (Bulinaet al., 2002).

Another blue chromoprotein from the genus Anemonia. See Figure 41.

This pigment was isolated from the anemone Cnidopis japonica by Chanand others in 2006. In addition to CP-610, it is also called “cjBlue”. This chromoprotein’s spectral absorption is resistant to low pH Values (Chan etal. demonstrated this resistance down to a pH value of 4.0). See Figure 42. 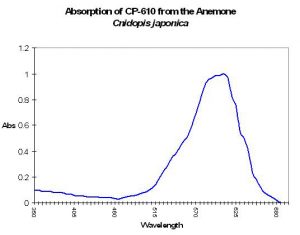 Figure 42. The chromoprotein with the most red-shifted absorption spectrum in this article is CP-610. It would appear quite blue to the eye. After Chanet al., 2006.

In 1969, coral researcher Kazuo Shibata suggested that combinations of chromoproteins within coral tissues could account for different colors. Specifically, chromoproteins 560 and 590 when in varying proportions could make Acropora corals appear red, pink, mauve or violet (See Figure 43). A more recent paper (Labaset al., 2002) suggests differently colored chromophores might be found even in proteins of the same color. 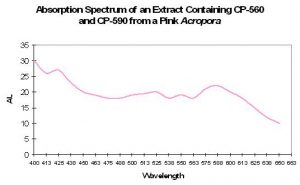 Figure 43. Two (or more) chromoproteins within coral tissues could result in an astonishing number of colors, such as this ‘pink’ Acropora specimen (After Shibata, 1969).

Veteran reefkeepers Julian Sprung recently described an infection of various cnidaria by a diatom (believed to be Haslea ostrearia), or a water-soluble pigment produced by H. ostrearia. To my knowledge, this isthe first description of the pigment ‘marennine’ staining coral tissues (marennine is, however, commonly found in certain edible oysters, where the green coloris a desirable trait). See Figures 44 and 45. 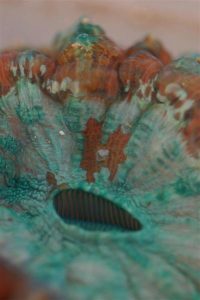 Figure 44. A macro shot of a stony coral (Cynarina) infected with a diatom. Photo courtesy of Julian Sprung.

Growth rates of H. ostrearia have been observed to be constant at PAR (photosynthetically active radiation) levels most often seen in home aquaria (100-750 µmol·m²·sec), and no photoinhibition was seen at intensities to 1,500µmol·m²·sec. This has led researchers to believe H. ostrearia can out compete many other algae at shallow depths in areas of low turbidity (Mougetet al., 1999).

Our brief discussion of marennine ends our listing of chromoproteins. Next time, we’ll begin to bring together the 200 or so pages of information within this series, beginning with our discussion of reflectance. 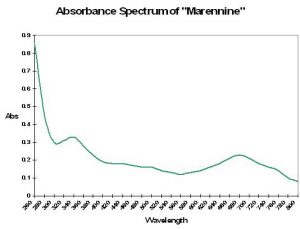 Figure 45. Absorbance of the pigment ‘marennine’, discovered within coral tissues by Julian Sprung. As with many pigments, absorbance is pH-dependent,and can appear blue, blue-green or green at pH values seen in aquaria. Spectraldata after Pouvreau et al., 2006.