Temperature and the Reef Aquarium

I know what you have to be thinking… An article about temperature. For Pete’s sake, reef aquaria have been popular for at least 20 years in the U.S., and one would think we’ve got a handle on proper temperature values. Just keep the water temperature between 70° F and 80° F, right?

Now, imagine this scenario: One visits the doctor’s office, and it is time to get your temperature taken. The nurse waves the thermometer in the air, and records the number. She has to be kidding – that’s not representative of your temperature! But this is analogous, in some cases, to what we’re doing when we simply make a water temperature measurement in an aquarium! Granted, the water temperature will be valid and truly represents the water at that particular spot and likely the temperature of most corals within the aquarium. However, there may be coral ‘hot spots’ if one is lighting the captive reef with high wattage lamps using pendent fixtures (especially those pendents made of aluminum and/or with a polished internal reflective surface). Not surprisingly, those corals most affected will be those directly under and closest to the lamp and they can be much warmer than the ambient water temperature indicates.

The implications are obvious. Coral bleaching could possibly occur in a few corals while the simply measured metric – water temperature – indicates conditions are within an acceptable range.

This article will convey the results of simple experiments and will combine this information with important results recently published in the respected journal Limnology and Oceanography. We will also briefly discuss observations made of pendent luminaire temperatures and how to potentially limit thermal transfer from the lamp to the aquarium.

A 100-gallon RubberMaid tub (holding 75 gallons of natural seawater) was maintained in a darkened, air-conditioned room. Two 400-watt metal halide lamps in pendent luminaires provided light to captive corals (mostly ‘lobe coral’ – Porites lobata – and Pavona varians). These corals were maintained for an experiment examining the effects of red light wavelengths on zooxanthellae. While checking different parameters for standardization, it was discovered that the two luminaires were operating at different temperatures. Not only that, but the corals directly beneath the one of the light fixtures appeared to be warmer (sometimes much warmer) than the water temperature.

This procedure utilized an infrared thermometer to monitor temperatures. While there was little doubt that temperatures measured on the luminaires were correct, there was some question about the ability of this device to accurately gage temperatures of objects submerged in water (albeit shallow water. Only 3 to 6 inches of water covered these corals. The bottom of the light fixture was another 6 inches or so above the water). This information (concerning temperature) was presented at the Washington DC MACNA. The testing protocol was questioned during the presentation.

Although I felt comfortable with the information, I decided to repeat the procedure. Two experiments were conducted – one experiment monitored coral and water temperatures with ‘good’ water motion, and the second focused on coral/water temps with ‘reduced’ water flow. Instead of using an infrared thermometer, I used two thermistors and a data logger from Spectrum Technologies. Holes just slightly largerthan the outside diameter of the thermistor were drilled with a masonry bit into the bottom of thePorites corals. These holes extended to within an estimated 3-4 mm of the top coral surface. The thermistor fit snugly into the hole and measured temperature just below the porous tissue/skeletal interface of Porites corals. The corals rested on eggcrate material which conveniently allowed water circulation (provided by a 5-gallon Carlson Surge Device, or CSD) around, over and under the corals. It also allowed the thermistor wiring to remain under,  and out of the way, during the experiment. The data logger was programmed to measure temperature and PAR every minute for the duration of the 3.0 – 3.5 hour experiments (this article will discuss only the temperature readings). Once everything was in place, the data logger began recording information and the 400 watt lamp was ignited a few minutes later. Temperatures were measured within the coral and immediately below it (in a shadow). Water temperature was also monitored with a calibrated mercury ‘lab’ thermometer. Accuracy of the two thermistors had previously been checked by placing the two sensors into a stirred and heated water bath and observing delta temperature across a broad range. The sensors’ responses as displayed in the data logger LCD were compared to a calibrated laboratory thermometer. Both thermistors were in agreement with the ‘lab’ thermometer to within 0.1°C (0.18° F) from ~20°C to ~40ºC. Engineers at Spectrum approved the thermistors and cords for immersion in seawater for a period not to exceed ~24 hours.

Figure 1. Time course temperature of aquarium water and a coral beneath a high wattage lamp. These are with ‘good’ water flow.

Coral temperature rose more quickly than water temperature under the conditions of these experiments. Figure 1 charts the temperatures of the coral and water with ‘good’ water motion. Figure 2 demonstrates temperatures with ‘reduced’ discharges from the Carlson Surge Device.

It is apparent that the coral warmed more quickly than the water during the course of both experiments, and the temperature differed by as much as 1.6°C (2.88°F, with ‘reduced’ flow) and 0.8C (1.4°F, with ‘good’ flow). Note that, under the circumstances of these experiments, it was possible to modify only the periodicity of the CSD discharge, and not the velocity (which, of course, remains the same).

Figure 2. Same as Figure 1, except with ‘reduced’ water motion.

A digital water velocity meter recorded velocity at a maximum of 42 cm/sec (~17 in/sec) and a period of 30 seconds for ‘good’ flow and ~1.5 minutes periodicity for ‘reduced’ flow. The periodicity of the ‘good’ CSD discharge is approximately that seen on Hawaiian reefs on a calm day, but velocity is 3 times that experienced by corals under ‘normal’ conditions. It is not unreasonable to have anticipated that the coral temperature and water temperature would have remained the same – they did not.

This raises the question about the effects of solar warming on corals on natural reefs. Katharina Fabricius (a name familiar to serious hobbyists for her work with soft corals) reports in a 2006 article that corals can indeed become warmer than the surrounding water. Further, she reports that the color of the coral can determine how it absorbs irradiance and hence influence the magnitude of temperature gain. The implications of her work are staggering – seawater surface temperature has been the metric to determine thresholds of coral bleaching. Fabricius’ work suggests that other factors are in play, and coral pigmentation could play an important role in determining if a coral survives an El Nino warming episode.

Luminaire construction can make a profound difference in focusing of light and reflection of ultraviolet radiation and infrared radiation. This became very apparent during recent experiments. I used two pendent luminaires – one had a painted interior, and the other internal surface was polished aluminum. The polished aluminum, possibly along with minor differences in pendent construction geometry, reflected visible radiation at a much more efficient rate than the pendent with the white paint interior. Apparently, it also reflected infrared radiation at a much higher rate (as evidenced by higher temperatures of corals kept under it). 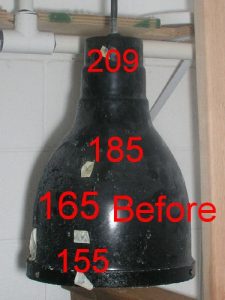 Clearly, this arena requires further research before we have a good understanding of thermal transfer from lamps to corals, and how we can avoid problems. For hobbyists, it is not possible to utilize an infrared thermometer in most cases and it is certainly impractical to use thermistors to monitor temperatures. At this point, the best we can do is look at those things we can do to minimize heat transfer to the aquarium. This leads us to a discussion of other things noted during this series of experiments.

The luminaire with the polished interior surface was not originally equipped with an acrylic ‘splash guard.’ This is unfortunate since no protection is afforded against lamp breakage due to thermal shocks caused by splashing water (it also allows potentially harmful ultraviolet radiation into the aquarium). The lens or splash guard will also absorb some infrared radiation. In order to standardize UV radiation (that is to say eliminate it) during the experiments, an appropriately sized lens was cut from a sheet of Lexan and installed on the luminaire. 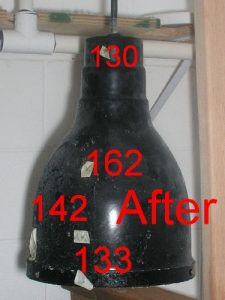 Perhaps the most dramatic observation was the superior efficiency of the polished aluminum surface as opposed to the luminaire with the internal surface painted white. The performance of the aluminum surface was great enough to allow dropping a full wattage level (i.e. 400-watt to 250-watt) and still get comparable light intensity. Imagine the reduction in the utility bill this ‘watt shaving’ could provide – all by simply choosing a lighting fixture with an efficient reflective surface.

These observations go well beyond a coral simply being a few degrees warmer than the ambient water temperature. It goes to the heart of one of the true challenges of maintaining a reef aquarium – that of expense. It is possible, under some circumstances, that proper selection of lighting equipment could in turn reduce or perhaps even eliminate the cost of purchasing and maintaining a water chilling device.

Ironically, in our attempts to create what we perceive as ‘natural’ and ‘proper’ conditions for symbiotic invertebrates, it is the use of high wattage lamps that potentially push the boundaries of corals’ thermal tolerances and could spell the doom of those animals unfortunate enough to be within the luminaire’s ‘hot spot.’. The solution is, in some cases, not a chiller but an effective and efficient lighting fixture resulting in utilization of lower wattage lamps.

It should also be obvious that ‘good’ water motion can ameliorate coral temperature increases. This is a double-edge sword since submersible pumps can add heat to the aquarium water. By the same token, it is potentially possible that low velocity water motion resulting in poor flushing could result in temperatures higher than those noted here. However, it is not the intent of this article to either examine all scenarios in which temperature could become a critical factor or look at other available options for reducing aquarium temperature. The scope is to establish that corals can, under certain conditions, gain heat from lighting sources. Corals directly under high wattage (400 or 1000) should be monitored closely for signs of decreasedpigmentation. What we once attributed to bleaching caused by high PAR values may actually be a result of a synergistic effect of the ‘terrible 3’: Light, heat and (if the lamp isn’t shielded as it should be) UV radiation. However, it is possible that temperature alone could trigger a bleaching event.

Perhaps this article reflects the state of reef-keeping. We’re focusing on minutiae – we have solved most major problems. But it is the little things that could make the difference in a thriving coral or a dead one, or potentially the difference between acceptable and outrageous monthly maintenance costs in the form of electrical utility bills. We can congratulate ourselves on the advances the hobby has made over the last two decades. By the same token, it reflects that we have a lot to learn.