This month our attention will shift to an occurrence likely seen only in aquaria – the possibility of starving zooxanthellae of necessary nutrients, resulting in low chlorophyll content.

Much has been written about the importance of water motion in a reef aquarium. It is not within the scope of this article to review the many effects of water flow. Instead, we’ll focus on one flow-related item – coral feeding through absorption or particulate capture – its possible link to coral ‘bleaching’ – and how lighting might play a part.

As a quick review, many healthy corals contain symbiotic dinoflagellates (Symbiodinium species, often referred to as zooxanthellae.) These captive algae help corals survive in waters that are often nutrient-poor by absorbing waste products produced by the coral (as well as uptaking some nutrients from the ambient water column) and producing (through photosynthesis) and sharing (translocating) products such as glucose, a few amino acids and fatty acids (among others) with the coral host.

When conditions become unfavorable, corals lose chlorophyll content by ejecting captive zooxanthellae or by reducing zooxanthellae photopigment content. This process is a last ditch effort to survive and is called bleaching. Severe bleaching causes the coral to become snow white. But bleaching is not always severe, and corals’ coloration might become lightened in color, perhaps changing from dark brown to only light brown or tan. Some may argue that this slight change in coloration is more correctly referred to as photoadaptation. So how do we define what bleaching actually is?

Coral researchers can give us some answers. Winters et al. (2005) defined bleaching as the loss of ~80% of the photopigment chlorophyll a within a coral’s symbiotic Symbiodinium dinoflagellates, or loss of a number of zooxanthellae to equal that 80% loss. Enriquez et al., 2005, reported actual chlorophyll a concentrations of 3.3 to 102.1 mg/m2 in bleached Porites branneri. Therefore, bleaching can be described as a percentage loss, or as actual chlorophyll content.

Forty Porites lobata fragments were housed in a 240-gallon aquarium. The experiment’s primary goal was to measure coral growth under different spectra and chlorophyll a measurements were made to examine possible reactions to light (specifically the possibility that red light would reduce the amount of chlorophyll a within the corals’ tissues.) Oscillating flow was generated by a tunze Wave Box that was estimated to be about 3 inches per second. For details of this experiment, see: http://www.advancedaquarist.com/2015/4/corals 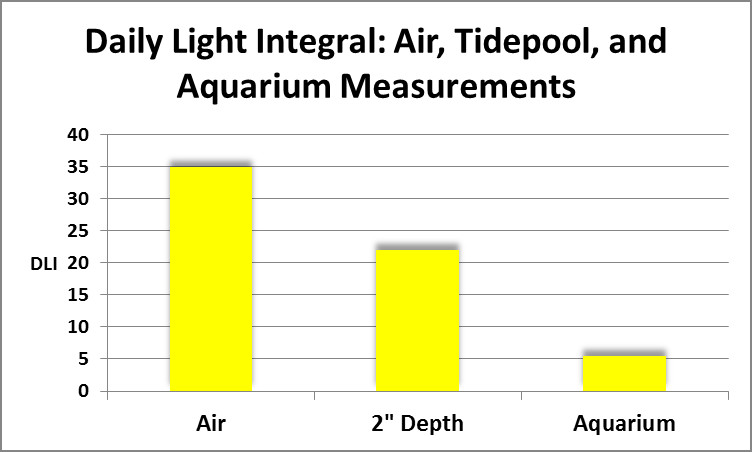 Figure 1. Total dosage of light at (air) and in (2″ depth) an Hawaiian tidepool compared to that experienced by corals subjected on light intensity of 128 µmolm²sec in an aquarium.

As it turned out, chlorophyll a loss was seen in all corals, regardless of spectral quality. If spectral quality was not the culprit, what was? Intensity could be ruled out. The corals used in this experiment were from a shallow tidepool where light intensity was almost that of sunlight above the water’s surface (as high as 2,000 µmolm²sec, or about 100,000 lux.) Light intensity used in the spectral quality experiments was only 128 µmol photonsm²sec. If instantaneous intensity was not responsible, perhaps it was the Daily Light Integral (DLI)? DLI is the concept of counting the total amount of light (photons) falling upon a given surface during the entire photoperiod. The popular analogy is that PAR values (correctly called Photosynthetic Photon Flux Density or PPFD, reported as µmol photonsm²sec) is tantamount to the number of raindrops falling per second. Obviously, this doesn’t tell us much – we would prefer to know the total amount of rainfall (inches per rainfall event) and that is what DLI tells us – it is the total amount of photons falling upon a given surface during the photoperiod.

Calculating DLI in an aquarium where light intensity is constant is easy. It is: µmol photonsm²sec * 60 seconds per minute * 60 minutes per hour * hours in the photoperiod / 1,000,000 = mol photonsm²photoperiod

As it turned out the DLI did not even approach the light this coral would receive on an overcast day during the winter (See Figure 1.) So, spectral qualities, instantaneous light intensity, and total dosage of light (DLI) were ruled out as factors in observed chlorophyll losses.

Results of a coral growth in responses to differing spectral qualities was published here: http://www.advancedaquarist.com/2015/4/corals

Figure 2. All corals grew during the lighting experiment. LED lighting (www.buildmyled.com) of differing spectral qualities was used. Growth rates were determined by weighing the corals with an analytical balance. Differences in growth rates were not significant. Were these corals nutrient deprived?

These data suggested spectral qualities (at sub-saturating light intensity and other conditions during the experiment) did not significantly affect coral growth rates. See Figure 2.

However, all corals, regardless of exposure to different spectral qualities, lost chlorophyll content. Clearly, another factor was in play, and water motion was the prime suspect. To this end, this hypothesis was developed:

Hypothesis: Under favorable conditions (moderate to high light intensity) water movement will be of sufficient velocity to minimize the boundary layer and diffusion of nutrients necessary for photosynthesis will cross this layer of stagnant water and become available for captive zooxanthellae. Particle capture by extended coral polyps will add to this nutrient availability. Nutrients required for photosynthesis will not be met during periods of flow either too low or too high (due to an increased boundary layer if flow is low thus preventing diffusion of nutrients through the stagnant water layer, or no particle capture by polyps when they are contracted to prevent damage by high velocity flow, or contracted when the energy required for polyp expansion is not met by low particle capture rates.) In short, chlorophyll content could be regulated by water motion.

So, the experiment’s protocol would be simple – monitor chlorophyll content to establish a baseline, and then while increasing water velocity. 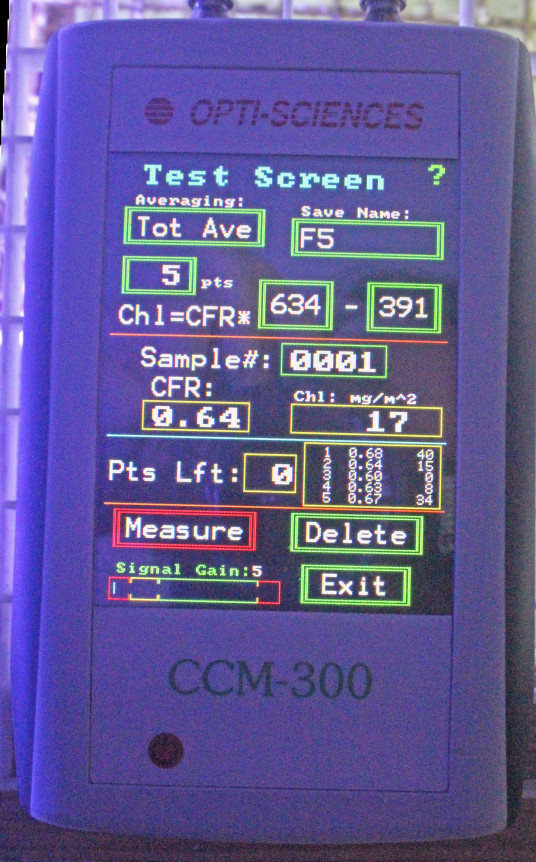 The instrument used in this experiment was a CCM-300 ‘chlorophyll content meter’ manufactured by Opti-Sciences, Inc. (Hudson, New Hampshire, USA.) This device allows non-invasive, non-destructive measurements of chlorophyll a. A bifurcated fiber optic cable delivers blue light to the sample which excites chlorophyll a, and the ratio of fluoresced red light at 700 nm and 735 nm is determined. This ratio equals chlorophyll a content and results are reported as milligrams per square meter (mg/m2.)

Over the course of almost 7 months, chlorophyll a measurements were periodically made at twelve, three, six and none o’clock as well as in the center of each coral ‘plug.’ These were averaged and entered into an Excel spreadsheet.

In order to increase water motion, a Maxspect Gyre XF150 was employed (in addition to the water velocity generated by the tunze WaveBox.) Flow was incrementally increased through use of the pump’s controller during the first eleven days of April. For a review of this pump see: www.advancedaquarist.com/2015/1/aafeature

Water motion is notoriously difficult to accurately measure unless a sophisticated instrument is available. In this case, an electronic water velocity meter was used – a FloMate 2000 (manufactured by Marsh-McBirney (Frederick, Maryland, USA) and marketed by the Hach Corporation in Loveland, Colorado, USA.) 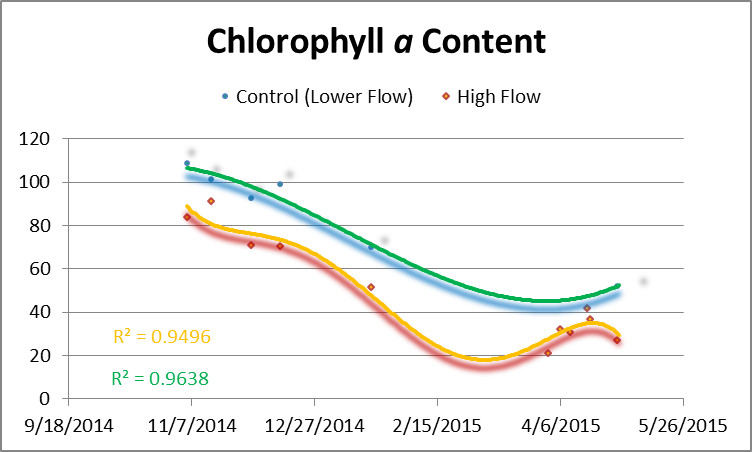 Figure 4. Chlorophyll a content of corals during the experiment. The orange line is chlorophyll content of the corals exposed to higher flow velocity while the green line is the control (unavoidably exposed an increase in flow velocity but a velocity still much lower than those corals represented by the orange line.) Flow was increased on April 1, April 6, and April 10.

Chlorophyll a content seems related to increasing water movement, and is likely due to decreased boundary layer thickness (resulting in sufficient diffusion rates of macro- and micro-nutrients required for photosynthesis) and polyp expansion (increased particle capture resulting in food for the coral and waste products for the zooxanthellae.) Major losses of zooxanthellae/photopigment content might be difficult to determine visually as shifts in brown coloration to lighter brown or tan color can be a slow process (months.) Loss of chlorophyll a could be masked by coral tissue fluorescence as well.

It should be noted that the only intentional change made immediately preceding (weeks) and during the period of increasing water velocity was increasing the pump’s output. No additives or water changes were made. Although water chemistry parameters were not monitored during the ‘velocity’ experiment, there is no reason to believe any significant changes occurred, based on 7 months of previous data (including water temperature, specific gravity, pH, alkalinity, ammonia, nitrite, nitrate, total nitrogen, organic nitrogen (by calculation), ortho-phosphate, total phosphorus, potassium, iron, total iron, ferrous iron, sulfate, copper, total copper, free copper, iodine, calcium, strontium, magnesium, fluoride, silica and, by calculation, silicon.)

Chlorophyll a and c2 absorb blue and red light, thus the reflected light is rich in green wavelengths, making many terrestrial and aquatic plants appear green. Some photosynthetic organisms (diatoms, dinoflagellates, brown algae) contain additional photopigments (such as fucoxanthin and peridinin) which absorb some green wavelengths, making these appear to be brown in color. Hence, the more photopigment content, the ‘browner’ the organism will appear. Conversely, a reduced concentration of photopigments will make the plant/coral appear less brown. The question is this- Is it possible to determine visually if a coral is technically considered to be ‘bleached’ (an 80% loss of zooxanthellae/photopigments, and not the snow white appearance of severely bleached corals.) See Figure 5 for examples of coral color due to photopigment content.

Loss of chlorophyll content associated with water motion has not been previously reported, to my knowledge. This loss is more likely an event seen in aquaria where even ‘good’ water movement does not rival that seen on a real reef during calm periods.

Important observations also include that bleaching can be a slow process, and not necessarily an event that renders the coral ‘white’ in appearance – a bleached coral can be light brown or tan in color. Although there was significant loss of photopigments in the zooxanthellae, ‘bleaching’ may too be too strong a term to use. Perhaps the condition observed is correctly referred to as chlorosis (caused by nutrient starvation.) But does it really matter which term is used? Loss of photopigment could result in poor translocation rates of sugars, amino acids, fatty acids and other substances to the coral animal, resulting in coral animal malaise.

The results of this experiment ask many questions: Is it possible to maintain ‘natural’ chlorophyll content simply by maintaining ‘adequate’ water motion? Will intentional feeding of the coral animal increase chlorophyll content (and perhaps the overall health of the holobiont?) An experiment designed to answer these questions is now underway.