This month our examination of described coral pigments continues with a glimpse of yellow and orange coloration, along with a listing of characteristics associated with photoconvertible fluorescence. It is certain that we do not possess all the answers to pigment photoconversion and other apparent color shifts. However, the results of research projects of many scientists do offer a tantalizing look at how corals’ pigmentation can respond to various environmental stimuli. With this information in hand, we can perhaps begin to predict how corals react to external pressures and manipulate these reactions.

To begin, Table 5 lists the pigments discussed in Part 3 of this series (see Part 1 for a full listing). 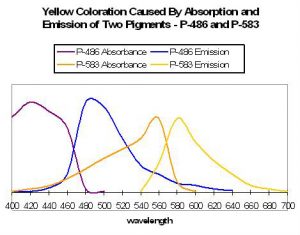 Yellow coloration can be due to at least several sets of circumstances. Yellow fluorescence can be the apparent color when two fluorescent pigments – red and green – are present together and in proper proportions. The red fluorescence may be due to either chlorophyll a fluorescence or reddish fluorescent pigments within the coral host tissue. For example, Matz et al. (1999) found a combination of Pigments 486 (green) and 583 (orange-red) appear as yellow (see Figure 55). If the red pigment is in greater proportion than the green pigment, the color of fluoresce can be described as orange in color (see below). Yellow fluorescence can also be attributed to a single pigment or series of pigments resulting in emissions peaking in the yellow portion of the spectrum. Mazel (1997) illustrates this point – he found a yellow pigment in the Elephant-skin coral (Agaricia) with an emission peak in the yellow-green portion of the spectrum (557 nm and two shoulders). Excitation wavelengths peaked at 507 nm (blue-green). 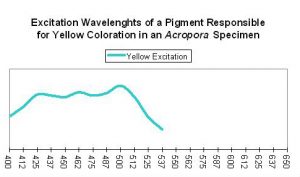 Figure 56. These wavelengths are absorbed by a pigment found within a yellow Acropora specimen. After Shibata, 1969.

In addition, there is a yellow fluorescent pigment called Zoanthus Yellow Fluorescent Protein (or ZoanYFP, as described by, among others, Labas et al., 2002). The peak emission is at 536nm (yellow-green), but extends well past 600nm, giving it a yellow appearance.

The visual perception of orange coloration is fairly common in marine invertebrates and for good reason. There are a number of true fluorescent proteins with emissions in the orange portion of the spectrum. Green fluorescence (such as P-496), when in combination with chlorophyll fluorescence and/or perhaps one of the true red fluorescent proteins (P-610, P-620, etc.) accounts for some cases of ‘orange’ fluorescence (Mazel, 1995). Some seem to be truly orange pigments, some of which are listed below, such as that noted in Cynarina lacrymalis (Logan et al., 1990). Mazel (1995, 1997) identified the orange pigment P-575 in the Caribbean Star Coral (Montastrea cavernosa). Blue-green (500 nm) and yellow-green (565 nm) wavelengths are most strongly absorbed. Mazel (unpublished data) also identified a similar pigment in the Orange Velvet Coral (Montipora digitata), with excitation wavelengths at 506 and 555 nm. 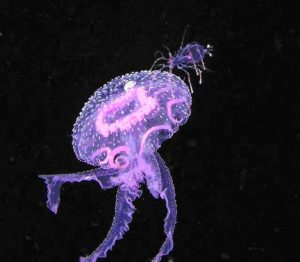 Figure 59. Orange fluorescence is visible in this jellyfish and sea-spider. Photograph taken during a night dive off the Kailua-Kona, Hawaii coast by Sara Peck.

Relative brightness of this red form is 0.68 (when compared to a modified form of A. victoria GFP).

Discovery of the photoconvertible nature of P-582 was discovered when a vial of P-518 was inadvertently left on a laboratory bench and exposed to light. (I have tried for years to convince my supervisor that a small indifference to laboratory housekeeping can lead to great discoveries. After all, the antibiotic penicillin was found growing on an old, moldy sandwich. My boss remains unconvinced.)

Ando and his team bought their Trachyphyllia at a local fish store. While there, they noted, but did not buy, fluorescent yellow Open Brain corals. It is tempting to think that these yellow animals’ GFPs were in transition from green to red, with yellow being the perceived color when red and green granules are present in correct proportions. This seems to be confirmed by the work of Dittrich et al. (2005); they found no intermediate fluorescent states (such as yellow) when green pigments transform to red ones.

Phycoerythrin, a biliprotein, is a photosynthetic accessory or antenna pigment found in red algae (including calcareous forms) and cyanobacteria. Hobbyists tend to lump cyanobacteria (sometimes referred to as ‘slime algae’) into a category akin to an ‘axis of evil’ but this shouldn’t necessarily be so. Mazel et al., 2004 found unicellular cyanobacteria existing within the tissues of the stony coral Montastraea cavernosa. These nitrogen-fixing bacteria convert dissolved nitrogen gas to nitrogenous compounds that are available for use by symbiotic zooxanthellae, thus potentially giving these corals a competitive edge in a nitrogen-poor environment. In return, it is thought that zooxanthellae provide cyanobacteria with organic substances such as glycerol for use as food. The discovery of this symbiosis is important enough but is perhaps of most interest to hobbyists since phycoerythrin is a fluorescent pigment, with an emission peaking at 573-580nm (Mazel, 1995). Cyanophytes have also been found in symbiosis with sponges and other marine animals (Larkum et al., 1987).

Figure 76 shows the absorption spectrum of phycoerythrin with peaks at ~497nm, 539nm and 565nm. Variations in the concentrations of two bilin groups (phycoerythrobilin and phycourobilin) can alter the absorption spectra, and the 539nm absorption is sometimes absent in certain red algae. Interestingly, the ratio of phycoerythrobilin and phycourobilin in phycoerythrin can be manipulated by varying the light intensity during the growth of the red alga Callithamnion roseum (Yu et al., 1981). Spectral quality may also play a role in determining apparent coloration. Laboratory studies have shown that light enhanced in the green-yellow portion (500-575nm) encourages biosynthesis of phycoerythrin, while red light (600-700nm) inhibits production and hence accumulation of this pigment. This should not necessarily be regarded as proof of chromatic adaptation since Kirk (2000) states that increased concentrations of phycoerythrin can occur in response to lessened light intensity (there is some evidence that same adaptation occurs in zooxanthellae – see Kinzie and Hunter, 1987). Light intensity – PAR – may also play an important part in husbandry of phycoerythrin-containing corals. Moore and Chisolm (1999) suggest that intensity exceeding 250 µmol·m²·sec will inhibit growth of the high light adapted cyanobacterium Prochlorococcus. PAR of ~125 µmol·m²·sec was harmful to the low light-adapted growths of Prochlorococcus. Aside from suggesting ‘strong light’ will control cyanobacterial outbreaks within aquaria (another anecdotal story among hobbyists), it also seems to suggest that corals containing phycoerythrin ‘require’ relatively little light. 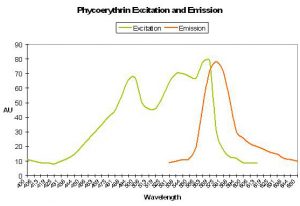 Figure 76. Spectral qualities of the accessory pigment phycoerythrin (found in some coralline alga as well as cyanobacteria sometimes in symbioses with corals). After Cyanotech specification sheet.

Photoconversion of some brown corals to colorful ones (or vice versa) are phenomena that can confound any hobbyist (or researcher, diver, etc., for that matter). The ability to shift coloration seems to be a genetic trait limited to a minority of coral species.

Photoconversion of fluorescent pigments is often associated with the presence of ultraviolet radiation and visible light in the violet/blue bandwidths. It may come as a surprise that wavelengths that do not promote photosynthesis to a great degree (“junk” wavelengths, photosynthetically speaking) can be responsible for color shifts. These ‘junk wavelengths’ include shortwave green light and yellow light at ~570nm.

Next time, our discussion continues a look at lamp spectra, transmission qualities of various ‘UV shields,’ and how they probably relate to coral color. We’ll also scrutinize various reasons for red fluorescence. It will also include a brief review of scant evidence linking nutrients and ‘supplements’ to coral coloration.

See Part 1 for a full listing of references. Anyone wishing to correspond with the author via email may do so at RiddleLabs@aol.com.